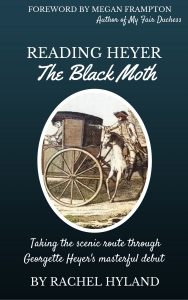 In which we serialize Society Patroness Rachel Hyland’s first book in her Reading Heyer series, Reading Heyer: The Black Moth. Called “delicious” by Heyer expert Jennifer Kloester, it is a reading guide, critique and loving homage all in one. But mostly, it’s just a lot of fun. We hope you enjoy. Check back every Sunday for another installment, or buy the book here.

Mrs. Fanshawe! Remember, she was the intriguingly direct little widow whom we met in the last installment, and whom it transpired was acquainted with our Jack, from his time on the Continent as a hard-living gamblin’ man. She invited Dick to stop by for a chat any time, and it is here that he first avails himself of the opportunity—only to be thwarted in his desire to talk of all things Jack-ish by the lady’s preponderance of visitors, which we can only assume we’re hearing about to either a) shore up our opinion of Mrs. Fanshawe as well-liked and popular or b) increase the number of people who have noticed the married Dicky’s interest in this attractive single woman.

Regardless, it is only on his second visit that Dick manages to catch his new – and his brother’s old – friend alone, and he pumps her for information on Jack’s post-allegedly-cheating-at-cards career. She tells of their meeting in Vienna, of how Jack would make her invalid, elderly husband laugh and of the time he fought a secret duel in her honour, damaging some rascally Austrian noble in the lung. Dicky listens raptly, and in the end, she reveals that she thinks he must surely be her “Anthony”’s brother, for she has now heard the scandal surrounding the elder Carstares, and is overcome with pity for her “poor boy,” now to always be in exile.

Dick, of course, is not such a dick that he doesn’t feel appropriately guilty over his part in the whole affair, and he tells Mrs. Fanshawe – and quite rightly, too – that Jack is “worth a thousand of me.” The he heads home, there to mope and sigh and wish that he could convince his wife to let him tell the truth and to bring Jack home.

That, then, is the flame lit by Mrs. Fanshawe, as the chapter title promised.

It is the very next day that the flame is fanned, when a cameo appearance by our bluff Sir Miles O’Hara has Dick in a panic. O’Hara wanders into the Cocoa Tree, at which club both men are evidently members, and upon sight of Dick his genial countenance goes “hard and scornful.” And then, dude, Miles totally gives Dick what is known in historical fiction as the cut-direct, which is exactly what it sounds like, and must be just as uncomfortable to witness as acrimoniously divorced parents at a college graduation.

“O’Hara knew the truth!” is all Dick can think as he staggers from the club, shattered. And, oh, if O’Hara knew all… did that mean Jack was “in trouble”? (Brilliant deduction, Dick! I’d sarcastically call you Sherlock, but you wouldn’t know who that is, he not having been invented yet.)

I cannot believe that I am also somewhat in sympathy with Dick here, too. Mainly due to this passage:

… he worried on through the night, tossing to and fro in his great bed, a weight on his mind, a ceaseless ache in his heart.

But I have to say any positive feelings I was beginning to develop were somewhat tempered by this:

Towards dawn he fell asleep and did not wake again until his chocolate was brought to him. Bitterly he reflected that at least John had no conscience to prey upon him; he did not fall asleep with his brain seething with conflicting arguments, and awake with the decision as far off as ever.

Oh, lucky, lucky Jack! He may have been ousted from his position of wealth and prestige, may have been cast off by his august parent and seen contempt in the eyes of those he’d long considered friends… but at least he didn’t have to feel bad about having been the cause of it all.

But what fresh bouts of indecision will we witness in this conscience-plagued, henpecked younger son? Just how high will that fire, first ignited and then fanned, actually burn? And, seriously, does Tracy really love his sister… or, indeed, anyone? Let us find out, in Chapter XXII…

New chapters of Reading Heyer: The Black Moth will be posted here at Heyer Society each Sunday. Or buy it here.

Not yet a member?