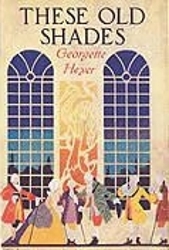 I really didn’t know what to expect from this one. The blurb of my Kindle edition read:

Considered the book that launched Gerogette Heyer’s career, These Old Shades features two of Heyer’s most memorable characters: Justin Alastair, the Duke of Avon, and Leonie, whom he rescues from a life of ignominy and comes to love and marry.

The Duke is known for his coldness of manner, his remarkable omniscience, and his debauched lifestyle. Late one evening, he is accosted by a young person dressed in ragged boy’s clothing running away from a brutal rustic guardian. The Duke buys “Leon” and makes the child his page. “Leon” is in fact Leonie, and she serves the Duke with deep devotion. When he uncovers the true story of her birth, he wreaks an unforgettable revenge on her sinister father in a chilling scene of public humiliation.

So, okay. For a start, that whole blurb is basically spoiler, and I don’t like it, not one bit. Why would they away the end of the book? I really believe that my liking for These Old Shades was ruined by knowing how it was going to end — I kept waiting for the public humiliation to come, and it spoiled not only any uncertainty I might have had about the outcome, but also destroys any suspense that Heyer otherwise manages to cultivate pretty successfully.

Did the people who wrote this blurb assume that anyone buying this book would already have read it, or at least know what it was about? That is the only explanation, and sorry, but Heyer’s works just aren’t that universally well-known.

Despite the pall cast over it by its horrible description, however, I have to say that I really enjoyed this book a lot. I enjoyed the supercilious, incisive Duke of Avon — he’s a popular Heyer hero, and I can see why — and the irrepressible Léon/Léonie, and their relationship, even though the fact that he kept calling her an “infant” even after they get together kind of grates on the modern woman that I am, never mind the age difference. I could initially forgive all the “my infant” stuff because it was clear he was trying to distance himself from her, try to convince himself he wasn’t in love with her, or that he would be a suitable match. But later? That’s just creepy.

Actually, there’s a fair amount about Avon that is creepy. His past is no picnic, what with the attempted abductions and the ruthless gambling and neglect of his family.

Our illustrious Rachel tells me that most fans consider Avon to be Heyer’s redemption of The Black Moth‘s Duke of Andover, and the parallels are pretty clear: both have shady pasts, both have wit to spare, both are considered omnipotent, and both have a satanic-based nickname, the one “Devil”, the other “Satanas”. Even their siblings — the beautiful, frivolous sister, the carefree, charming brother — are similar, and they both have kind, sensible and honourable best-friends who put up with them being jerks, who knows why?

But where Andover’s habit of kidnapping and raping women is made explicit, and leaves him unredeemable in our eyes, Avon’s murky past is left more subtle, and so we quite love it when he is lured away from his love of vice by his innocent but wise servant/ward/wife. It’s quite lovely, really.

I also really appreciated the insight into French history that this novel delivers, even more so than did Powder and Patch. I went and did a lot of further reading about many of Avon’s aquaintances and Léonie’s suitors, and it was very illuminating. Heyer’s research is impeccable here, as always, and so is her dialog. Avon and his brother Rupert are especially hilarious, and I laughed out loud with them several times.

If this is indeed the novel that — as that hateful blurb suggested — “launched Georgette Heyer’s career”, then I can certainly see why. I loved it a lot. I just wish I hadn’t known so much about it going in.

Maura Tan was born in Zanzibar, grew up in Morocco and lives in Singapore, where she is currently studying for her third degree in Contemporary Literature—when not writing reviews for Romantic Intentions Quarterly and eating her bodyweight in durian. 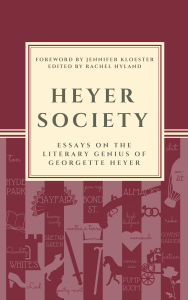 BUY A IS FOR ALMACK’S — A REGENCY ABC